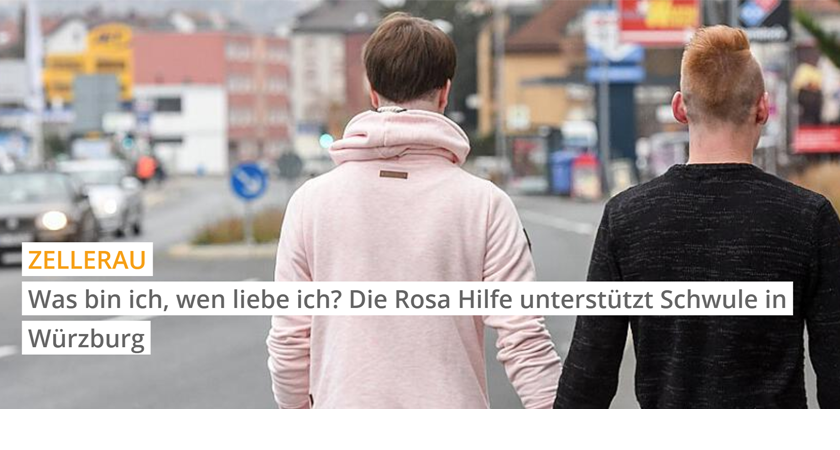 Article on MainDing in November 2018

There are a lot of questions that gay men and lesbians ask themselves in search of their sexual identity. “The variety of nuances are so diverse today that one could get the impression that simply being gay is no longer enough,” explains David Hein. The 37-year-old is part of the Rosa Hilfe advisory team, which was formed in 1978 as one of the many services offered at the WuF Centre in the Zellerau.

Homosexuality is still a difficult topic for many people today. Until the 1980s, gays were also discriminated against in public. “There were hardly any people who publicly admitted to their homosexuality”, said Hein. Fortunately, this has changed in the meantime. “Society has become much more open.” Nevertheless, many would still find it difficult to “come out”. This is particularly noticeable in rural regions. “When you grow up in a small village community, you only confide in your very best friends,” says Patrick Häußlein, who also works at Rosa Hilfe. “In a city hardly anyone is interested in that anymore.”

The seven-strong team of advisors at Rosa Hilfe offers a kind of consultation hour every Wednesday from 8 p.m. to 10 p.m. by telephone or via chat. This opportunity is used especially by those who feel particularly lonely. A phenomenon that has increased strongly again in recent years, as Peter Haeußlein and David Hein observe. Above all, 40- to 50-year-old gays from rural areas would get in touch.

The next larger project for Rosa Hilfe is Christopher Street Day, which will be reissued next year. For the first time it will be called “Wuerzburg Street Day” and will take place on June 29, 2019.