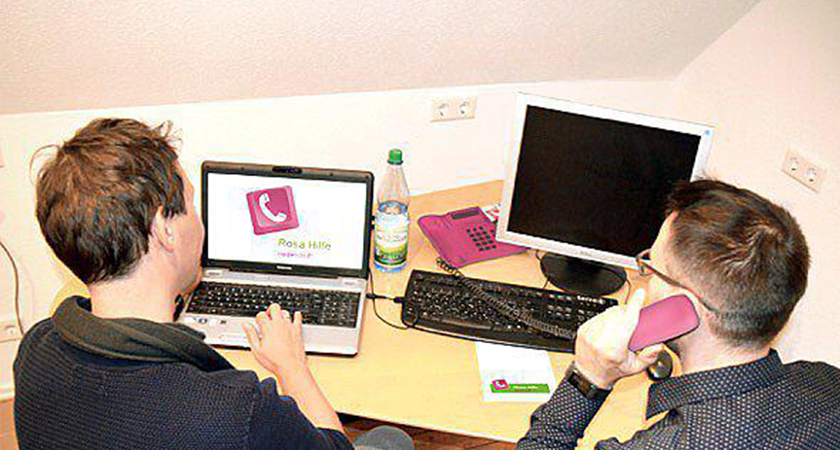 Announcement of the 40th anniversary celebration in the article from Mainpost of 12. November 2018.

Since 1978, Wuerzburg has been offering counselling on all aspects of the lives of gay, bisexual and transsexual men. Under the umbrella of the WuF e.V. gay and lesbian centre in Würzburg, a team of consultants has been formed.

The Germany-wide brand name Rosa Hilfe has been used from the very beginning, explains the institution in a press release. The basic idea has not changed in all these years. Gay men still volunteer every Wednesday with qualified help. In all these years, however, the way of communication has changed. In the beginning it was almost exclusively telephone enquiries, but today most enquiries come via chat and e-mail.

Also in terms of content much has changed: In the founding years, besides coming out, coping with discrimination and experiences of violence was a central theme. In the 80’s and 90’s HIV and AIDS had a strong impact on the lives of gay men which was also reflected in the inquiries. With the liberalization in the 2000s and the same-sex partnership, new fields of consultation in the legal area were added. Today the topics are still about coming out and health prevention, but increasingly it is also about loneliness.

In order to celebrate the 40th anniversary in a fitting manner, Rosa Hilfe invites you to a gala on Sunday, 18 November, starting at 7 pm at the Bockshorn. With a colourful and dazzling show, the audience may join in the celebration. On stage are the Cologne writer Anne Bax, Peter Kuhn from the Schwarze 11 in Schweinfurt, Nico Rosenberger on the harp, the dance combo Nobody Knowz and the pop choir Sotto Voce. The evening will be presented by Jutta P. from Gerda’s small world stage. The city’s greeting will be held under the patronage of Lord Mayor Christian Schuchardt.

The net proceeds of the event will be used for the training and further education of the volunteer advisors, so that also in the future the offers of help can be offered on a high level.

Cards can be obtained at the WuF Centre, at the toy store Die Murmel or at the Bockshorn.